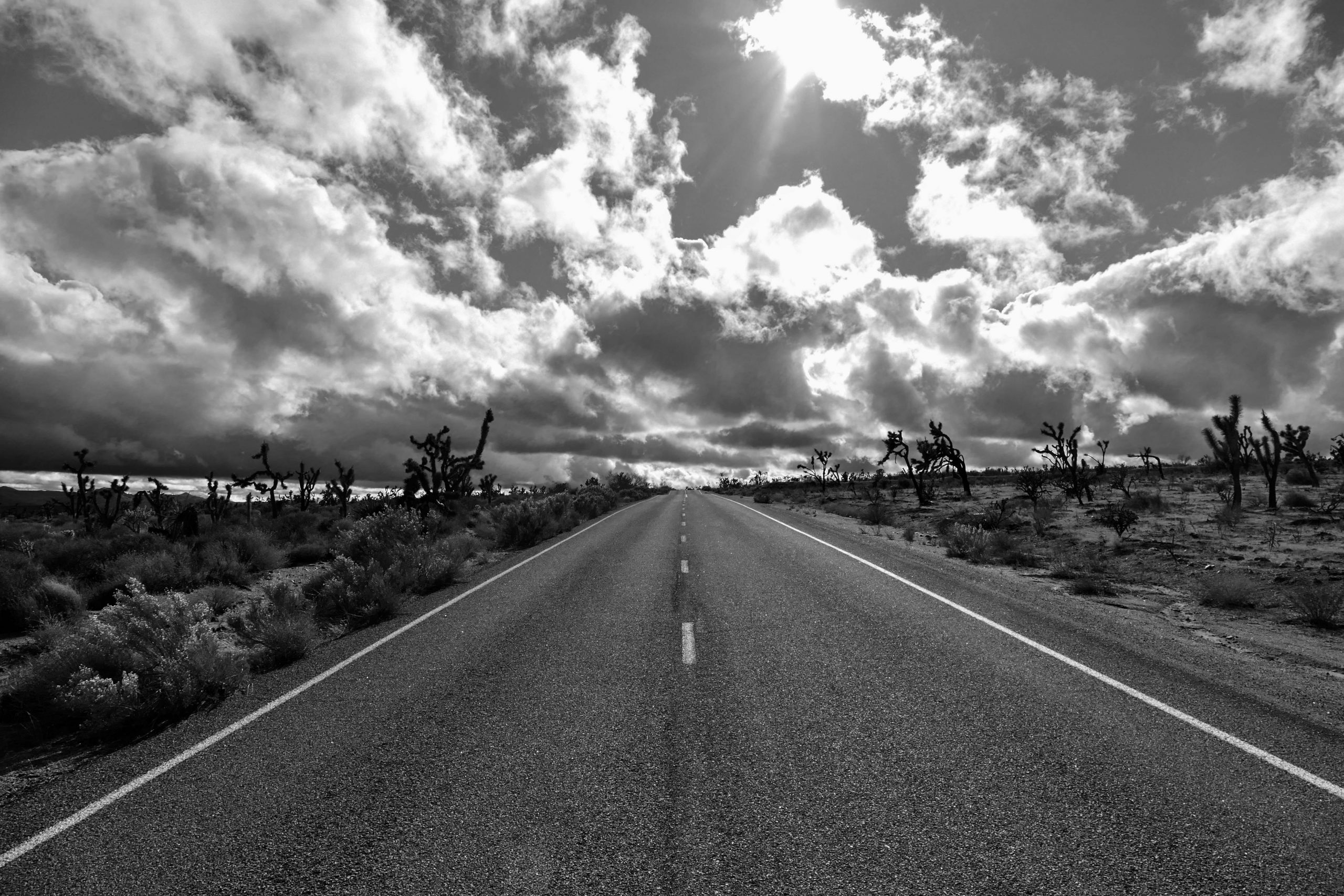 I’ve been fascinated lately with the way our creative interests and hobbies play into or support our writing. Nearly all of my writer friends have other interests. Some are creative, some are just for fun, some are more grounding. I asked a half dozen writers to tell me about their other creative or just-for-fun pursuits and to discuss how those things inform their writing.

“I make erasure poetry to entertain myself and my friends because I find it relaxing and empowering to pull out a deeper agenda within a text. I attend ballet class because it gives me so much pleasure to be in this group of retired ballerinas for whom it is easy and natural to move beautifully. I love being in the room with the music and the barre and the teacher. I’m often the worst one there–and I am learning the language and the moves so it’s humbling and overwhelming, and I have to concentrate so hard–all feelings I put myself in intentionally to inform my writing. But mostly it’s just the beauty. Bodies doing ballet are about the most beautiful thing I can imagine.”

“Nature trails. Birds. Animal life. Behaviors. Birding informs my fiction writing daily. Everything from the jewel of a Summer Tanager to a coyote gulping down a poor bunny. These moments sneak into my stories, help me illuminate how beautiful and dangerous the world can be. My sci-fi story ‘Sky Seekers’ in El Porvenir, Ya! was inspired by what AI birding could be in the far distant future.” 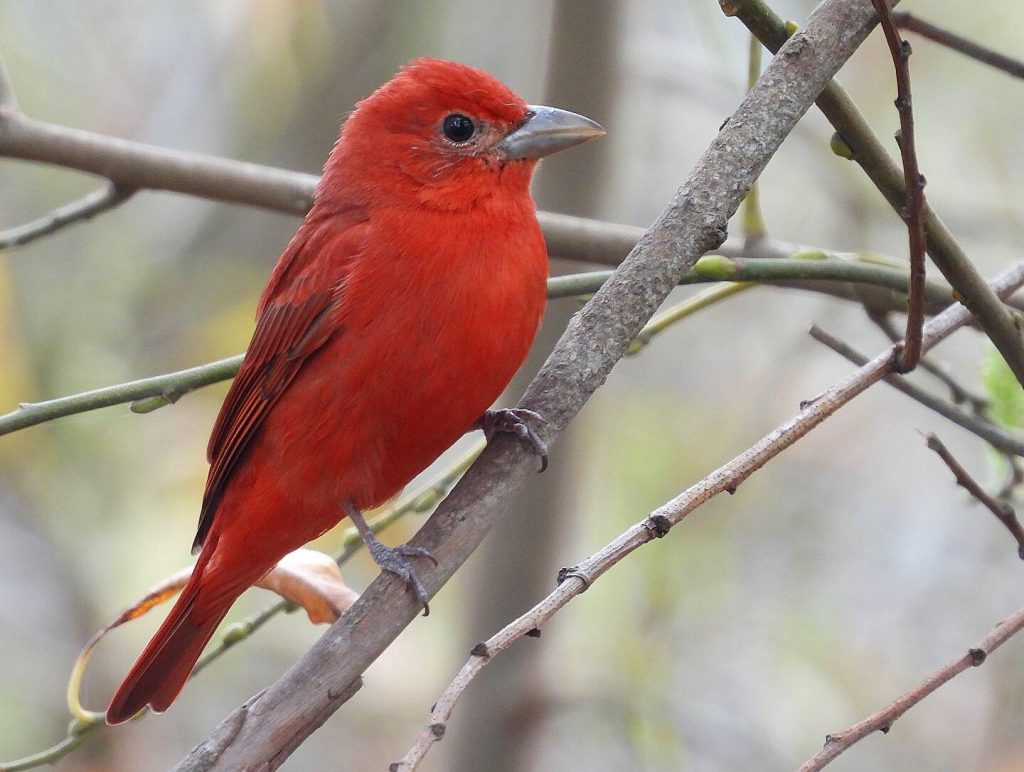 “My Reality TV pleasure brings me a sense of community with people. Instagram, Reddit, friends, etc. Like with the women in my squad, we had such a good time discussing Love is Blind. After and during the pandemic, I’ve come to realize that I need the escape of reality TV and the drama of people I don’t even know on TikTok. It’s fun and it doesn’t affect me directly. I’ve always loved people and their stories, and though people deem it trashy, I love it!

“I think for Real Housewives in particular there can be very complicated issues at hand and human drama—especially how we react to things—is on display. Dissecting with friends and seeing what the internet has to say is really fun and can lead to really interesting conversations. There’s of course the element of some of it being contrived. Some housewives are AMAZING at stirring the pot and Bravo fans will joke that those housewives themselves are producers when we know they want to keep their jobs. There’s also the phenomenon of the second season housewife who totally changes in various ways to respond to their debut season, which can be fascinating. I could go on, clearly.

“For celebrity culture it’s the same but different. Growing up in LA and being around big names, I’ve had a front row seat to how these people act. For instance I went to school with a now B-list actor’s daughter and the daughter of perhaps the most famous living director. And the director’s daughter was incredibly down to earth while the actor’s daughter made a huge display of ordering take-out for lunch everyday—which is expensive—AND had a town car pick her up. So I learned a lot about how people in Hollywood display their insecurities. So celebrity gossip is sometimes like gossip about people I know. But then I’m also a nosy bitch.

“And I just can’t be out of the loop about any cultural phenomenon. I’m too interested in the general discourse. I am getting better at being okay with not being in the loop with everything. I’ve stayed away from Euphoria because it seems anxiety producing. Progress.”

“Writing is very cognitive and sedentary, as opposed to photography, which is very instinctual and active. While my artistry and emotion come through my mind with writing, my creativity with photography comes through my body. First through my eyes, and then by a reactive feeling in my body. There is less time to think with photography, one must act on impulse, or miss the shot. Photography is not done sitting at a desk – one stands, sits, squats, climbs, and lies on objects to get the right shot. Both mediums compliment the other; after one is physical and instinctive with photography, there is space for the meditative and heady practice of writing. Photography clears my mind and puts me in the moment. It gives me the space I need to subconsciously process my writing and then return with a fresh view. Writing helps a photographer think about story. Photography helps the writer listen to their instincts.”

“For me, being creative has always been about play, to an extent. Trying things and having fun and pushing myself intellectually in an environment where nothing is at stake and where no one else gets a say in what I am doing. Writing used to be like this for me, but now that it is becoming more like work (which, of course, was the goal and I am grateful for it), I need other forms of creativity to fill that void of doing shit for shit’s sake. For me right now it’s getting back into visual art (which I did a lot as a child but stopped for about a decade), and writing poetry, which I always thought I hated and was bad at. Turns out I just hadn’t yet found types of poetry that spoke to me. I also find it helpful to be able to switch to another creative project when I get stuck on another. It feels like a productive way to take a step back until I know how to move forward. And since I am usually working on more than one thing at a time, each of the projects end up having hints of each other.”

Jackie DesForges’s essay “How to Build an Artist” recently appeared in Air/Light.

“I could go on for hours about fiber arts. Planning a knitted piece is a lot like planning a story. Instead of words, the story of a fabric is told in color and fiber. The process uses complimentary parts of the brain that feed my need to create. Knitting uses a different but equally creative part of my brain.  Sometimes when I am stuck on a scene, I’ll pick up the needles to put myself into a different mode.  This change in focus often unlocks a fix.”

Laurie Rockenbeck is a Seattle crime fiction writer hard at work on her next novel. She also makes the best quince liqueur I’ve ever tasted. 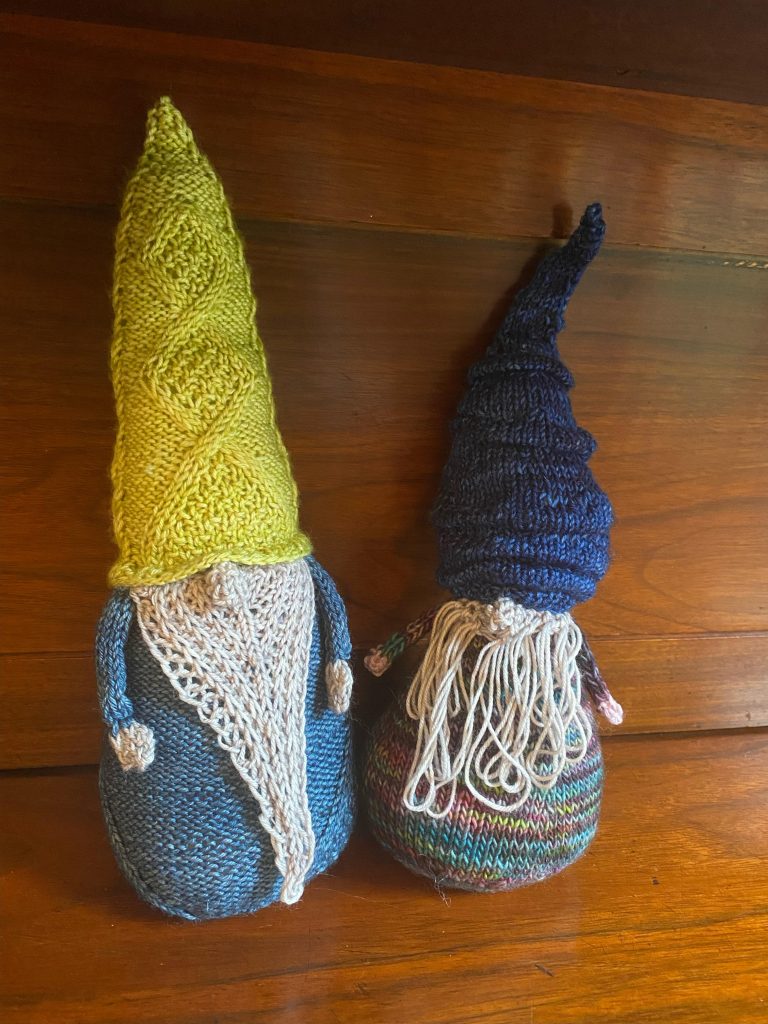 One of Laurie Rockenbeck’s fun current projects–a gnome every month in 2022. 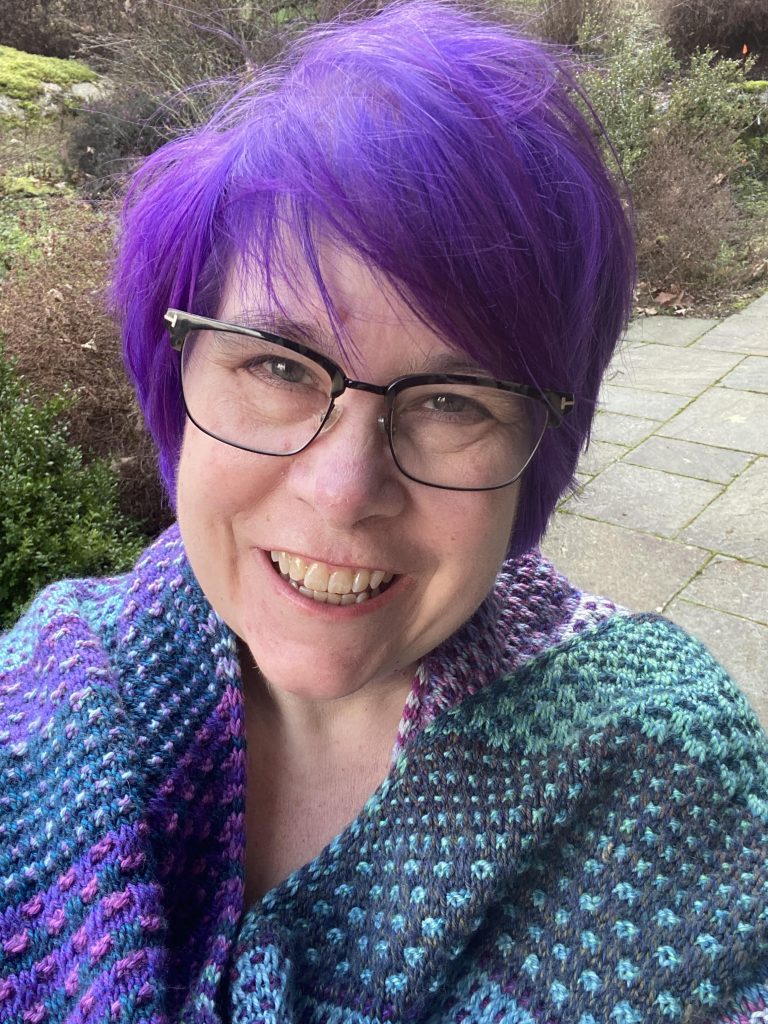 Author Laurie Rockenbeck shows off one of her many knitting projects.

WRITER TIP: Scientific studies have shown that having creative interests and hobbies outside of writing will make you a better writer. Hobbies are good for people in general–they support physical health and emotional well-being. For writers, they have added benefits: they get us up and away from our desks; stimulate different centers in our brains; provide us with opportunities to observe people and the world around us; and inspire us creatively. One of my favorite short story writers, Flannery O’Connor, wrote: “I know a good many fiction writers who paint, not because they’re any good at painting, but because it helps their writing. It forces them to look at things.”

4 thoughts on “6 Writers & Their Pastimes”