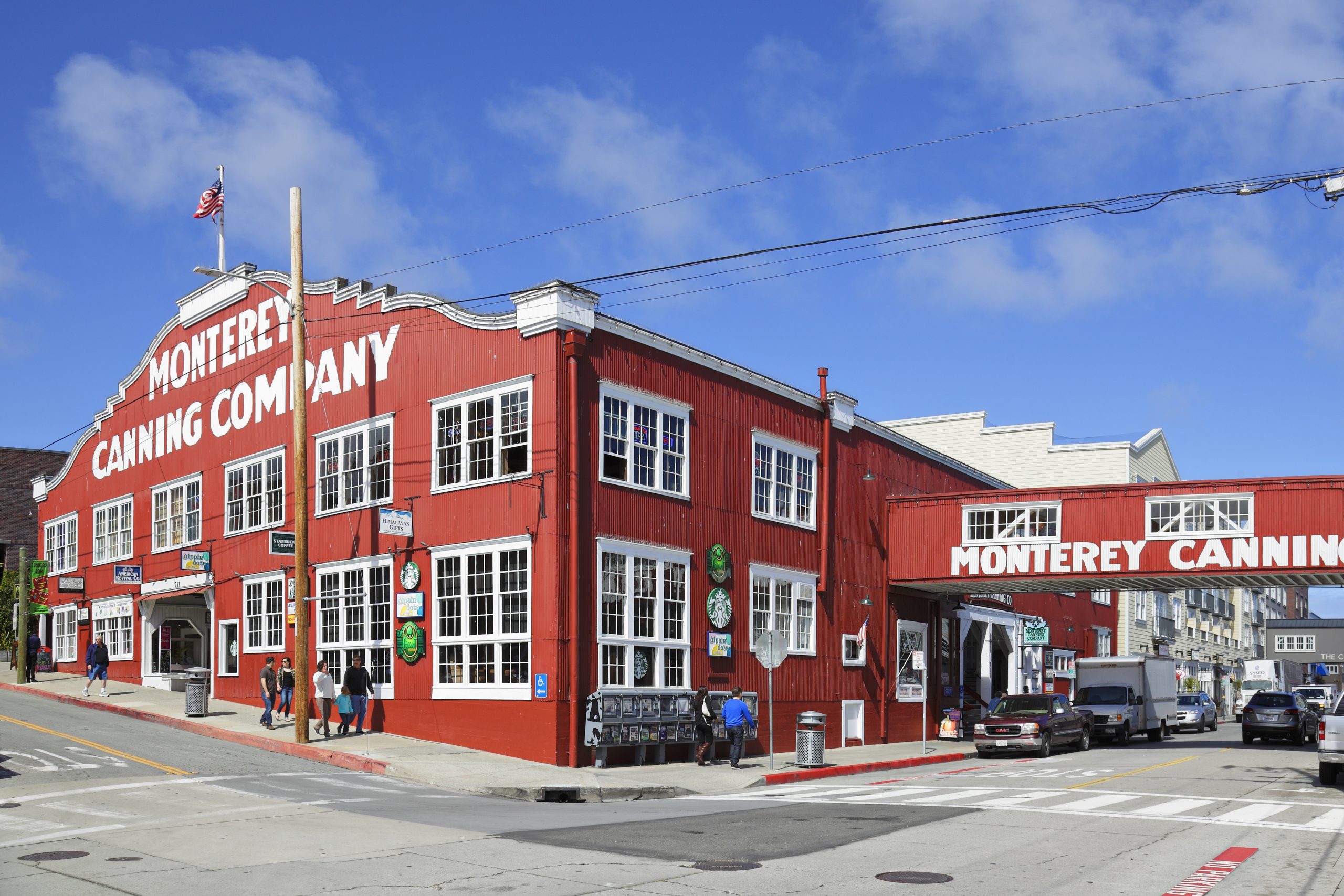 I haven’t been to Monterey for more than three years now, but I’m dreaming of it lately, and I hope to get back to visit soon. Monterey is the place in the world that feels most like home to me. It’s the place where I feel most like myself and where I feel most inspired to write. I want to talk to you about Monterey because it has contributed so much to the way I write. I credit my time in Monterey County for my passion for place in my writing. I’m wondering whether there is a place in your life that helped to create the writer you are, too.

Visiting Cannery Row always spirits me back in time, not only in my own life, but in the lives of my ancestors and others who were drawn to this place, like John Steinbeck. You don’t grow up in the Salinas Valley without having at least a little something in common with Steinbeck. My family emigrated to Monterey County from Oklahoma during the Dust Bowl, just like the characters Steinbeck wrote about in The Grapes of Wrath.

My grandmother Rubye never read a Steinbeck novel, but she came to California from Oklahoma as a child, and the language was in her bones. She once wrote this in her journal: “My first schooling I ever remember was in Moss Landing, California, and we lived in a very little house and our bedroom went out over the water. When the tide came in, it was so very cold and we would watch [the ocean] down through the big cracks in the floor. The little house was back behind Johnny’s Fruit Stand. My father and brothers, Grover and Peck, picked apricots, and my mother and sister Pete cut them to dry in a shed. … After the jobs ended, we put our mattresses, pots and pans on top of two old, open touring cars and headed back to Oklahoma.”

Eventually, my grandparents moved to California permanently. My mother went to high school in King City, where Steinbeck’s East of Eden is set, and I was born there. As children, my siblings and I visited both sets of grandparents in Soledad, the setting for Steinbeck’s Of Mice and Men. We played on the banks of the Salinas River, just beneath the Soledad overpass, in the same spot where George and Lennie have their last talk. 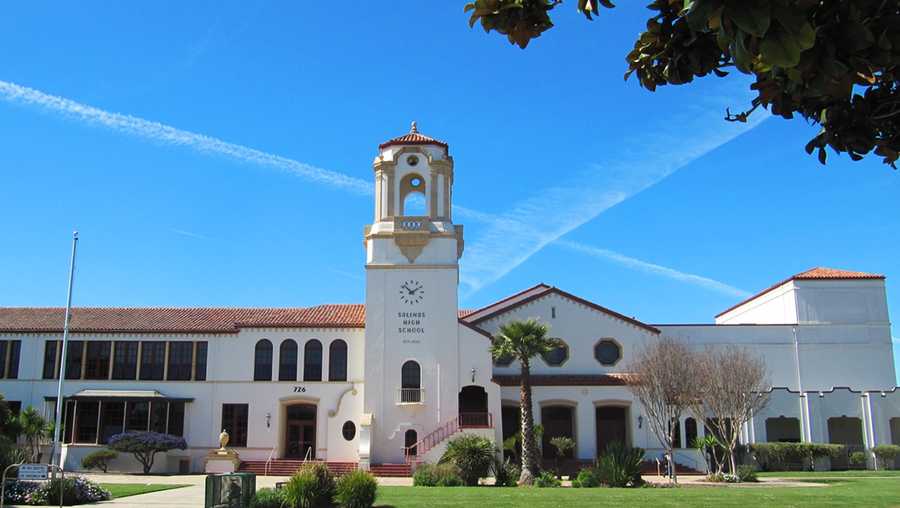 Salinas High School, where John Steinbeck graduated in 1919, and
where my girlfriends and I hung out to meet boys in the 1970s.

I read my first Steinbeck books in junior high, The Pearl and The Red Pony. I went to North Salinas High School. Steinbeck went to Salinas High–they were our rivals in football, but we drove slowly past the school when we cruised Main Street, or we hung out on its grassy lawn if we were on foot. I was a young mom when the film version of my favorite Steinbeck novel, Cannery Row, premiered in Salinas, complete with red carpet, flashing cameras, and Hollywood movie stars.

Someday, I hope to spend a month writing in John Steinbeck’s Writer’s Studio or Cottage, both of which are available to rent on Airbnb. It is one of a handful of things on my bucket list.

“Cannery Row in Monterey in California is a poem, a stink, a grating noise, a quality of light, a tone, a habit, a nostalgia, a dream,” Steinbeck wrote. “Cannery Row is the gathered and scattered, tin and iron and rust and splintered wood, chipped pavement and weedy lots and junk heaps, sardine canneries of corrugated iron, honky tonks, restaurants and whore houses, and little crowded groceries, and laboratories and flophouses. Its inhabitants are, as the man once said, ‘whores, pimps, gamblers and sons of bitches,’ by which he meant Everybody. Had the man looked through another peephole he might have said, ‘Saints and angels and martyrs and holy men,’ and he would have meant the same thing.” (The opening paragraph of Cannery Row by John Steinbeck (1945).)

Cannery Row is my favorite Steinbeck novel not only because of the story, which stands alone, but because I am intrigued by the very real characters behind the story, including Cannery Row itself. Cannery Row is more than a setting. It became the title of the book for a good reason–it easily takes its place next to Doc as one of the main characters in the novel. Steinbeck was passionate about place, too. 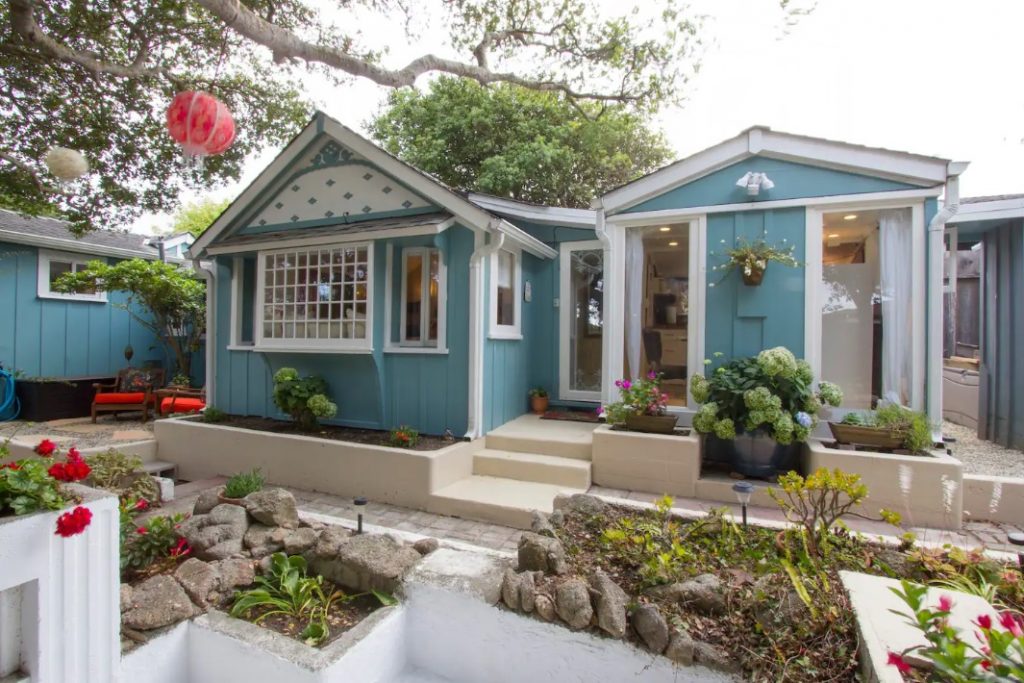 Steinbeck was also passionate about people and marine biology. The character of Doc is based on Steinbeck’s real-life friend, Ed “Doc” Ricketts, a marine biologist. The friendship and marine science work of Steinbeck and Ricketts are well-represented today at the Monterey Bay Aquarium and throughout Cannery Row.

“And it is a strange thing that most of the feeling we call religious, most of the mystical outcrying which is one of the most prized and used and desired reactions of our species, is really the understanding and the attempt to say that man is related to the whole thing, related inextricably to all reality, known and unknowable … that all things are one thing and that one thing is all things–plankton, a shimmering phosphorescence on the sea and the spinning planets and an expanding universe, all bound together by the elastic string of time. It is advisable to look from the tide pool to the stars and then back to the tide pool again.” (From The Log from the Sea of Cortez by John Steinbeck (1951).)

Steinbeck incorporated all the things he was passionate about into his writing. Those things make his writing transcendent and evocative. Capturing a sense of place in your writing is just one way of adding texture and layers to your stories. Pay attention to the ways your favorite writers incorporate place and setting into their stories. Think about the places you love, and take a crack at describing them in such exquisite detail that you give your readers the gift of experiencing them, too.